Sure, as an actor I portray different characters; but as you might imagine, with my look and background Santa is the character I play the most. In November and December, it’s live appearances at parties, fund raisers and community events. June through October it’s Santa Claus auditions and shoots for TV programs and commercials all over Los Angeles and sometimes even outside of the area, one year I shot a commercial in Alaska. 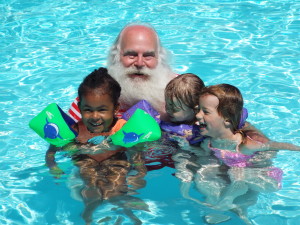 January through May… what does a year round Santa do in Los Angeles that time of the year?

Well, I’ve actually shot several commercials and music videos in January through May, but this is a first for me. I had a dad find me on the Internet and ask if I was available to attend the birthday party of his 5-year-old daughter who just happens to love Santa Claus.

I could not be more excited. Just imagine 15 4, 5 & 6-year old’s attending a party and then having Santa Claus show up. I will read books with them, answer their questions and even stay through the blowing out of the candle. Yes, Los Angeles there is a year round Santa Claus and his name is Santa Ed Taylor.