Up around 6:30.  Just worked on my new talks. Drove down to Huntington Beach in the afternoon.

Up around 6:30. Met with Gary Barr. Looks like Beach Cities Nissan will sponsor me a car. I also receive an audition notice for an MTV audition on Monday. Had a phone consult with a marketing client about Facebook ads. Got the videos I did with Denise Ross up on YouTube and added them to my IMGmembers website. I also received an audition from Hugh for a Kmart audition Monday afternoon!

Up around 6:00. I worked on my HelloSanta contract. Made “Santa Claus Seeks a Writers Retreat” flier. My folks came over to Marci's at 4:00. We had Costco pizza and Marci and Mom went through Marci’s stuff determining what goes where when Marci moves in January.

Up around 6:00. Looked at Santa Monica Chamber website and events. Created blog post for TGGOA. Worked for 2 hours on Sync stuff. Talked with a client about her site. Went for bike ride around the lake at 6:30PM.

Up around 6:00 got a blog post done for IMGmembers, added new client as a member of IMGmembers, worked on new talk. 11:00 Sync call. Went shopping. Spent some time on Facebook- new request for video chat Santa’s – watched some tennis with Marci. 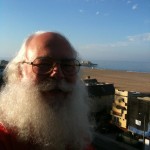 I left for Santa Monica at about 7:00 AM. I walked the grassy path above the beach for a while. It is much different than walking trail in Lithia Park. The joggers and walkers were all talking, some very loudly, the cars added to the noise and distraction of it. I also noticed more homeless people than I had expected. I

drove on up to Malibu were I had a funky breakfast special at- Country Kitchen  21239 E Pacific Coast Hwy, Malibu, CA. I had the special which was an egg pastrami breakfast sandwich which was pretty good for $5.75.

On the way back to Santa Monica I stopped by the beach to watch the dolphins and pelicans.

Found 1 “Guest House for Rent”, called and left a message. Went through Beverly Hills and then back to Torrance to pick up my bike from the Clarry’s. Back at Marci’s about 6:00 PM.