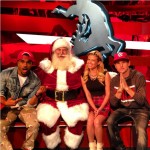 What a day. I loved it. I went to Marci’s in the AM to get the tire pump for my bike and to get my suspenders (ended up they were in a box at Viv’s all along). I headed to the show about 10:30 and arrived at Hollywood Center Studio about noon. It was amazing. As soon as I entered the gate there was a guy there who directed me to a parking spot and a woman who drove me in a cart to the stage area. I was shown to me “green room” which was very modest. They touched up my hair and powdered my nose. I got mic ‘d. Marci and Kevin arrived. We hung out for a few minutes and then they were showed to their seat (front and center). I was taken to my spot to await my introduction. Once introduced I went on stage and had a blast. The show was Ridiculousness with Rob Dyrdek and the co-hosts were Steelo Brim & Chanel West Coast. They LOVED ME. After the show Marci, Kevin and I had lunch on the “Lucy Show” stage with the cast and crew.

I worked at Marci’s until about 2:00 and then headed to Viv’s. Moved in and prepped for the MTV shoot in AM. I previewed Ridiculousness video’s and came up with lines to use in my video reviews during the show.

Talked with Will about the Wake Up and Be Happy site at 8:30. Instructions to Steve on the site. Exchanged emails with my agent about the upcoming MTV shoot. Talked Dorian about the Hello Santa. Talked with Shane Nickerson the producer of Ridiculousness, he told me what to expect at the shoot. The production coordinator Anton also called to get me all the info on the time, place, etc. Picked up key at Vivian’s at 7:30PM

Up at 5:30. Busy day. I had a call with Will about Wake Up and Be Happy stuff at 8:30 and a call with Dorian and the Hello Santa team at 9:30. Set up the first Santa “onboarding” meeting for Oct 1 with GoToMeeting. Wrote a The Greatest Gifts of All blog post for Wednesday and an IMGmembers post for Thursday. Had a phone Meeting with a coaching client pertaining to SEO in the afternoon. At 6:30PM I received an audition for FedEx at 11:40AM on Wednesday.

Dorian picked me up and took me to Huntington Beach where I picked up a red Nissan Rogue from Gary Barr at Surf City Nissan. Then Wake Up and Be Happy call at 11:00 then calls all afternoon from Marci’s.

Just relaxed all day in Ashland.