Went for a drive at 7AM. I wound up driving down to the beach, Newport, Laguna, Dana Point, San Clemente. While driving along the beach I was constantly reminded of all of the paths I have taken in my life.  I called my brother from the San Clemente pier and we had breakfast.

From there I went to my grandma’s house and we talked for a couple of hours. The conversation with my Grandma reminded me to think more about consideration and how I should make a more conscious effort to be more considerate of others.

I called my folks to see about coming by to visit. They were watching the tennis finals, and it was hot so I just went back to Marci’s to work on my new talk for a bit. Mitch was working, shooting a wedding and Marci was at Kevin’s.

Much of the day. I also went in the pool, twice, it was very hot. Went for a bike ride about 7PM. I have not had any auditions the first week down. 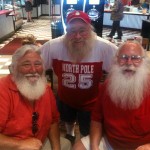 I had a call with an Internet marketing clients about is SEO at 10AM, then to lunch at Fuddruckers with Santa Steve Eastis and Santa Kevin Scott. Spent the afternoon doing client work then at 7:00PM went for a bike ride around the lake at Marci’s.

I spent the AM writing and posting posts for IMGmembers and The Greatest Gifts of All. I then left Marci’s to meet actor Mike Magdelino for lunch at Seaside Palace in Torrance, stopping by Bob’s Car Audio on the way to drop of the sound board and speakers we used at Danika’s wedding.

The lunch was fun, I really liked the food and Mike shared some of his Hollywood insights. From there I went to the Clarry’s and had a GoToMeting meeting with one of my Internet marketing clients. I stayed at the Clarry’s for dinner and conversation with Gordon and Colleen and got back to Marci’s about 9:30.

I let my agent Hugh & his assistant Jennifer know that I’m in LA and eager for auditions.

I spent the day hanging out with Marci, Kevin and Mitch while working with ATT to get the micro cell working, finally after 7 hours we got it working. I took a little bike ride around the lake.

I drove from Ashland to my sister Marci’s house in Irvine, CA. I left Ashland at 4:50AM and arrived at Marci’s at 3:50PM 11 hours. I did not stop to eat, only 2 gas stops almost no traffic in LA. It seems like that’s about as fast as it can be done within the speed limit.