I had so much fun appearing as Santa Claus in 4 national TV commercials, an appearance on the Food Network, another appearance on KTLA News 5, a movie trailer with Mark Wahlberg and WILL FARRELL for their movie Daddy’s Home, an Internet commercial for Coca Cola and several other Internet videos 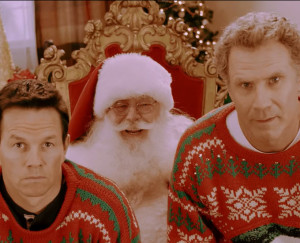 And as fun, as all the TV work was I have to tell you the live appearances are certainly the frosting on the cake. I teamed with the Dream Center and Justin Turner with the LA Dodgers to deliver 150 bicycles to incarcerated women. It was an amazing experience.

I also made an appearance at Bobby Sherman’s gala event in Beverly Hills where I had an opportunity to meet the amazing Sidney Poitier.

All said and done I made over 80 personal appearances, several for Hollywood productions companies, 2 for different divisions of Facebook’s LA office, and one for Eric Stonestreet, which was a ton of fun, he’s a terrific guy and the guests at his party were many of Hollywood’s top stars and they were all just amazing and incredibly fun!

In Southern California, many Santas make appearances on TV commercials and at entertainment industry events, in fact, one Santa goes by the moniker “Santa Hollywood”. So I’m certainly not alone but I do have to tell you that for only being a Santa in the LA area for 4 years and only having an agent for 3 years I do feel incredibly blessed to have been so embraced by the entertainment industry and the entire Hollywood community.

Please don’t call me Santa Hollywood, like I said, another Santa Claus already has that handle but if you are in the Hollywood area and are looking for a Santa for TV, a film, an Internet spot… or a personal appearance, I would be honored if you would check me out http://www.imdb.com/name/nm6253273/resume?ref_=nm_ov_res and give me a call, my handle- That Santa Guy or simply Santa Ed.