Being Santa Claus in Southern California has provided me with more fun experiences than I could have ever dreamed of. Imagine getting a call asking you to be Santa Claus in Hollywood for the 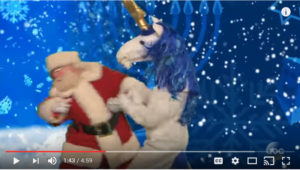 Jimmy Kimmel show. I was thrilled when I received the call… and I had a blast taping it!

Earlier in the year, I auditioned along with dozens of other Santa’s and I was fortunate enough to book the job as the Santa sales manager for the 2016 Chrysler commercial. It blew me away! Then to have it debuted during Game 7 of the World Series, WOW!

And then to see it air over 10,000 more times, like they say, only in Hollywood. I love being a Hollywood Santa Claus! 🙂

Appearing on The Doctor’s TV show, That Awkward Gam 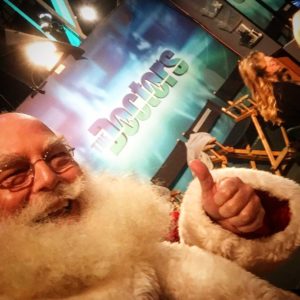 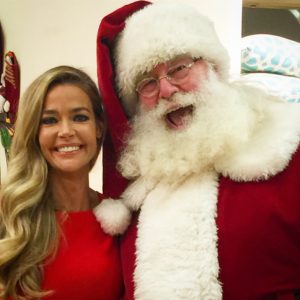 what more could a Santa ask for?

At Children’s Hospital Los Angeles I met a teenager who asked for Santa to get her 500 views on her YouTube channel. Santa and his “helpers” delivered.

Now sitting here on Valentine’s Day I’ve had time to reflect on just what a blessing it is to be Santa Claus in this amazing community. Los Angeles, Hollywood, Beverly Hills, Malibu, 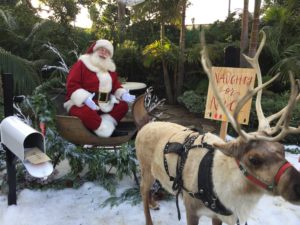 Manhattan Beach and the entire LA area is just incredibly unique and full of so many fun things to do as Santa Claus. For example’ I did some photos shoots on the sand on both Manhattan and Malibu beaches. The photos were amazing!  Also in Malibu, I made an appearance at a party for Kim 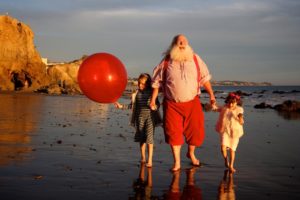 Kardashian, of course, that was amazing too… they even had some reindeer. 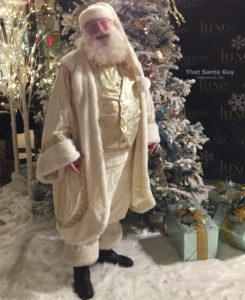 At an event for Grayson’s Luxury in Beverly Hills, I wore this incredibly unique white Santa suit… it was a huge hit!

One of the other highlights of 2016 was getting cast as the real Santa Claus in Beverly Hills Christmas 2. We shot several scenes in December and we’ll be shooting more this year. While on the topics of movies, A Doggone Christmas hired me to be a stand-in for Ed Asner… Ed Asner!

Well, 2017 promises to hold even more amazing experiences for me and for the people I get to work with. I’m developing new stories, expanding my Santa Claus wardrobe, taking classes to build my acting skills and so much more.

If you’re looking for a professional real bearded Hollywood Santa Claus for hire in Los Angeles, Beverly Hills, or anywhere in the greater west LA area please let me know.

And… please help me keep the Spirit of Christmas alive ALL YEAR LONG.