Last night in a Farmers Boys restaurant, the day before in a Hobby Lobby store and nearly every day on LA freeways, parking lots, gas stations faces turn to smiles as people spot Santa Claus. He’s out of place, out of uniform but never out of character. He is unmistakably Santa Claus. 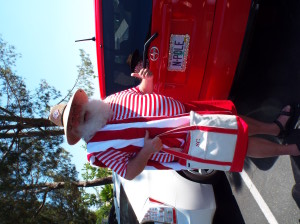 Usually wearing white shorts, a red t-shirt and sandals Santa Claus is on vacation… with a bit of work being thrown in from time to time. For example a few weeks ago Santa was in Hollywood where he spent the day shooting a commercial that will appear on TV this Christmas season.

Being Santa is SO MUCH FUN!

If you are in the LA area keep your eyes peeled for a little red Scion Xb with an N-Pole license plate. I spend a lot of time in Santa Monica, Studio City, Hollywood and the surrounding areas. Be sure to say Hi! 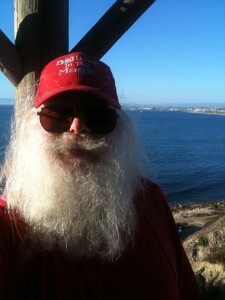 Let’s keep the Spirit of Christmas alive ALL year long.