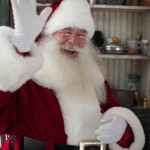 Hello Santa video shoot at Marci’s. Mitch shooting the video. Rob here too. We shot from 1:30 until 4:30 and then to another 45 minutes to load the video on to Robs computer. The shoot went well even though I had to take any takes on a bunch of the videos. After the shoot I took Mitch and his friend James to dinner at Lucille’s. When we got home Marci and Kevin were dropping off his loveseat. .

Woke up about 5:00. Started in about 5:45 on Hello Santa stuff. Marci Shimoff called and we ha a great visit. Went to City Center Comedy (improve show in Irvine). I’m thinking about getting into comedy.

Woke up about 7:00. Worked on the videos scripts Evan sent over for SayHelloSanta. Imported Santas from last night’s call into MailChimp. Gordon and Colleen came over to Marci’s and took some of the items Marci wanted to get rid of. Gordon and Colleen and I then went to lunch at Urban Plate. I was back about 4:00 and then started working on the “onboarding” email for SayHelloSanta. Marci went to Kevin’s.

Up about 5:30 did a morning meditation. Made a video post for the Greatest Gifts of All and a post for IMGmembers.  Met Doug at his wrist doctors. Talked with a client about her video and getting access to her YouTube account. Talked with HelloSanta team about the house and the Santa onboarding call.  Onboarding call at 6:00.

Got up about 7:00. Went through the CSL “Gift Bag” from Sunday. Call with Will at 9:00 to show him how to us the back-end of the Be Happy website. Worked on the Wake Up Be Happy website with Steve and the Facebook page.

Got up about 5:15. Talked with Rich- he was on his way back to Prescott. Worked on Halloween stills, exchanged emails with Dorian. Had client call at 11:00. Worked on client stuff. Lori bought tix to LA for Thanksgiving and Jennifer Clarry’s wedding. 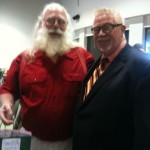 Woke up around 7:00 – felt good to have a nice sleep in. I attended an interesting and inspirational service presented by Dr. Jim Turrell at the Center for Spiritual Living in Irvine.I took Mitch to the Clarry’s to shot the video for Elfster. I then re-sized the videos and sent to Declan. Had dinner at Urban Plate. Very good. Expected to hear from my friend Rich Golden but did not. I called him and left a message about 6:00PM.