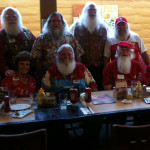 Woke up and got going around 7:00. Worked on and completed a post on The Greatest Gifts of All. Went to lunch with members of the International Order of Real Bearded Santas at CoCo’s in Garden Grove. Went to Wal-Mart to get ink for my printer. I was stopped by 5 people in the store and asked if I would pose for pictures. Of course I loved every minute of it.

Woke up and got going around 6:00. Worked on Hello Santa stuff. Worked on The Greatest Gifts of All stuff. 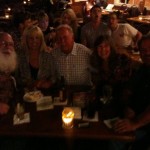 Went to Torrance, met up with the Clarry’s and went to dinner at Watermans on the Hermosa Beach pier. We then met up with Marci and Kevin at the Magic & Comedy Club in Hermosa Beach. There were 10 comics and they were all hilarious. We were setting close to the stage and several comics spotted me and announced that Santa was here and we had little back and forths. When the show end a few ladies wanted to take pictures with me. It was a VERY fun night.

Woke up and got going around 4:30 I added the “Santa’s Great Adventure” blog posts to SantaEd.com.

9:00 SEO Training program- on Hummingbird Update. At 1:30 I went to Central Casting in Burbank and 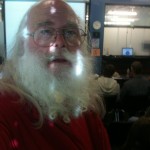 attended a class from 3:00-5:00pm conducted by Katey Wheelhouse, Assistant Director on NCIS LA. It was very interesting and helpful should I do any background work. Just prior to the class starting a snapped a selfie and posted it on Facebook. The hurried photo caught me without a smile and that caused many comments on FB. I arrived back at Marci’s at about 7:00. I had 2 inquires about being Santa in December, 1 a large event with snow at a country club.

Woke up and got going around 5:00. Mitch made pancakes. I booked flight home and back in January and changed truck rental. Worked on a client website with Lori, sent a blog post for IMG, talked with a woman about being Santa for her day care in Thousand Oaks. Worked on SEO training for Thursday. It’s a very long story but the bottom-line is I came across this Astrology website today a result of looking at Joe South’s bio. It seems to fit me VERY well- http://www.iloveindia.com/astrology/sun-signs/pisces/man.html

Woke up and got going around 7:00.  Talked with some Santas about the Hello Santa project. Worked on the Hummingbird SEO webinar. Worked on moving Marci’s stuff. Made truck reservation for Christmas day move. That was not good for Marci. Decided to fly home the day after Christmas and fly back a week or so later and rent truck to take home.

Woke up and got going around 6:00. Worked on content for Thursdays SEO training session.  Met with Hello Santa team at the house in Carson from 1:30 to 5:00 and then went to the Clarry’s for dinner.

Woke up and got going around 5:30.  Spent a lot of the day thinking about “Being in demand”. I went down to Doheny Beach and walked on the beach in the late afternoon where I was stopped twice to have pictures taken, very fun! Went to Ralph’s market picked up some food.