Woke up and going around 6:30. I conducted a test video chat with Santa through the Hello Santa system. I then Skyped with a bunch of Santas getting 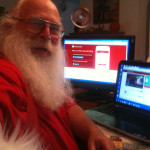 them ready to become Hello Santa Santas. My folks came over in the afternoon to help Marci pack up some things. We visited and watched the USC Stanford football game in the late afternoon. SC won in an upset.

Even though I have 38 more days down here in LA I feel my time is getting short. While I’m looking forward to being at home I also feel that I still have a lot of things down here that I want to get done before I leave.

Woke up and going around 5:30. I was available for Hello Santa calls from media and VIP’s from 9:00 – 11:00 I then Skyped with Santa’s as part of the Hello Santa onboarding process all day long.

I’m really enjoying talking with so many Santas, hearing their stories and just feeling the connection of kindred spirits.

Woke up and going around 6:30. Went to the Say Hello Santa house, picked up an extra monitor for my laptop. Conducted interviews with Santas via Skype all day long.

Woke up and going around 6:30. Conducted interviews with Santas via Skype all day long.

My Grandma’s 98th birthday. Woke up and going around 6:00. Tested the Hello Santa system with 4 Santas in the morning.  My parents brought Grandma to Marci’s about 1:00 and we visited. About 2:30 my dad and I went to Knott’s Berry Farm to get chicken and boysenberry pie for our gathering. 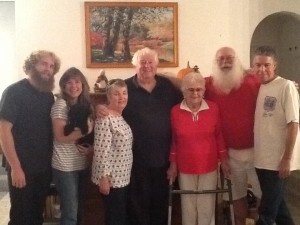 My brother Doug and his friend Janet dropped by about 5:00 they stayed until 9:00 or so and took grandma home with them. Marci, Mitch and I stay up talking about jobs, career and bunch of other stuff until after 11:00. We were all trying to help Mitch to gaining clarity about finding a job and finding his true vocation.

Woke up and going around 6:00. The email I sent recruiting Santas for the Hello Santa program  is working exceptionally well. I had a “Be Happy” team call at 11:00. I update collaborator pages on Wake Up and Be Happy site. Skyped with a bunch of Santas about the Hello Santa project.

Woke up and going around 8:00. 10 hours in bed. Felt GREAT. I think I really need the “big sleep”. Worked on Santa recruitment email for Hello Santa from me at Santa Claus Training. Prepared and sent the Santa recruiting email to my list of Santas. At about 9:00PM my cousin Brandon Facebook messaged me. We had an interesting exchange. I have not seen him in person or even talked with him over the phone in many years, probably 15 or more, I’m really enjoying connecting with him.