When I auditioned to be Santa Claus for Meijer I had no idea what I was in for. Of course, I was excited when I got the part, being Santa in street clothes is pretty much my everyday life. And I loved the idea of a commercial, especially a long format 90 second spot, that could really tell the story of being Santa day to day. 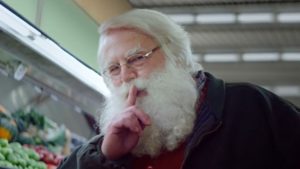 At the wardrobe session, which lasted for hours, they said they wanted to see me with a hairpiece… hmm… they put it on and I LOVED IT! I snapped a selfie and sent it home to Mrs Claus and she said she liked it… in fact she encouraged me to war it home. J

Anyway, shoot day came. After spending a couple of hours with hair and wardrobe it was off to shoot the first scene, the one in the library. That’s when it began to hit me… this is going to be special, very special.

The next 2 days were long and hot. I know it looks like we’re in Wisconsin in December, it’s actually Southern California in August. Temperatures are in the 80’s and 90’s.

As we went from scene to scene I think we all, the cast, crew, agency folks, everyone was feeling the magic. And that last scene… my heart melted shooting it as much as yours did watching it. I’m so incredibly thankful to The Distillery Project, Director Jamie Rafin, Meijer, the team at BroadCast Casting, my fellow actors and the incredibly talented and hard working crew. I am HONORED to be the Santa Claus for Meijer in the commercial.