You won’t find Ed Taylor on Wikipedia… yet, but if you did it would say something like this.

Edward Taylor (born March 4, 1954) is an American Santa Claus portrayal artist based in Southern Oregon who is notable for appearing as Santa Claus in movies, TV shows, commercials, and hundreds of personal appearances. 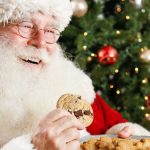 Since 2003 Santa Ed Taylor’s appearances include:

Then there are Internet ads & shows, music videos including “You Make it Feel Like Christmas” with Gwen Stefani & Blake Shelton, local & regional TV commercials, National TV commercials & shows including commercials for Chrysler, Reddi Wip, Band-Aid, Kohl’s, including and AdAge award winner for Meijer’s and many others, an international TV commercial for Mercari that was shot in Japan, TV shows including the Jimmy Kimmel Show, The Doctors, Superstore, Fresh Off the Boat, AP Bio and many others, movies and a movie trailer with Will Ferrell & Mark Wahlberg, Red Carpet events including Lifetime Channel’s Christmas season launch in Beverly Hills & a movie premiere at Paramount Studios, a national Associated Press media event for Target Stores, interviews with Fox Business, Wall Street Journal, LA Times, VOX, Money Magazine, Business Insider and many others.

Santa Ed makes appearances in “The Projects” of East Los Angeles and the mansions in Beverly Hills & Malibu and everywhere in between.

He has also mentored many professional Santas and taught classes at IBRBS & FORBS Santa Claus conventions.

In 2015 Ed started an online Santa School, The Santa Claus Conservatory which was converted to the Worldwide Santa Claus Network in 2020. The Santa Claus school has provided more than 130 training sessions, dozens of which were free. These sessions have been seen by more than 2,500 Santas & Mrs. Clauses worldwide and have received hundreds of rave reviews.

In 2019 Santa Ed created a group, the Worldwide Santa Claus Network, to help Santas and others help build and foster the Christmas spirit all year round.

In 2020 Santa Ed help pioneer the “Virtual Visits with Santa” arena by providing training to thousands of Santa & Mrs. Claus portrayal artists worldwide… and by personally appearing in hundreds for virtual Santa visits for families, companies, schools, community events, and many others.

Ed Taylor Wikipedia Bio Santa Claus… if you happen to know how to get me on an actual Wikipedia page please let me know.