A friend who had volunteered to be Santa Claus for a charitable event came down with a cold. Ed reluctantly agreed to fill in for him as Santa. Much to his surprise, Ed instantly fell in love with portraying Santa Claus… for the next 6 years, Ed volunteered to be Santa for parades, tree lighting ceremonies, community events, hospital fundraisers, Make-A-Wish foundation, and many other groups, organizations, and other causes in and around Southern Oregon.

In 2007 Santa Ed started providing ‘video visits with Santa’, at first through Skype, and later using Facetime, Zoom, Teams, and other platforms. 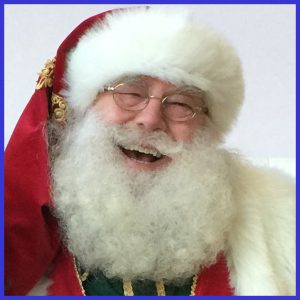 mall near Beverly Hills and to help demo their “Picture Perfect” software via free photos with Santa Claus.

In 2012 Ed decided to build a small business around his Santa portrayal. In September he returned to Los Angeles to begin building an ‘Entertainment Industry’ branch to his budding Santa business.

In 2013 Santa Ed accepted the role as Brand Ambassador for the tech start-up Hello Santa. That was also the year that he caught his first big breaks in Hollywood, making a groundbreaking appearance on MTV’s hit show Ridiculousness and shooting a national TV commercial in Alaska.

Santa Ed became eligible to join the SAG-AFTRA actor’s union, which he did.

Santa Ed has appeared in dozens of local, regional & national TV commercials & shows including commercials for Chrysler, Reddi Wip, Band-Aid, Kohl’s, including and AdAge award winner for Meijer’s network sitcoms, a couple of movies as well as the late-night shows including the Jimmy Kimmel Show, in fact, he appeared on the Late, Late Show with James Cordon twice in one week, with the Associate Producer referring to Santa Ed as, “Hollywood’s ‘Go-To’ Santa Claus”. You may have also seen him on The Steve Harvey Show, Magic with Humans, Superstore, AP Bio, and Ryan’s Mystery Playdate, Fresh Off the Boat, or others. 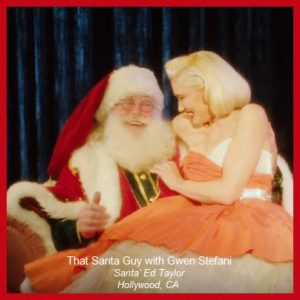 Santa Ed has also made many ‘special appearances’ including the music video “You Make it Feel Like Christmas” with Gwen Stefani & Blake Shelton, a movie trailer with Will Ferrell & Mark Wahlberg,  a commercial with Denise Richards, a Red-Carpet event at Paramount Studios with Ed Asner and Lifetime Channel’s Christmas season launch in Beverly Hills, an international TV commercial for Mercari that was shot in Japan, a national Associated Press media event for Target Stores, interviews with Fox Business, Wall Street Journal, LA Times, VOX, Money Magazine, Business Insider and many others.

As of 2021, Santa Ed’s appearances on TV & social media have been viewed well over a billion times.

Santa Ed also has also made more than 1,000 personal appearances.

In Los Angeles, Santa Ed is known for his appearances at Tree Lighting ceremonies at Children’s Hospital Los Angeles, Paramount Studios, the 3rd Street Promenade in Santa Monica, among others.

He has appeared at many celebrity parties in Beverly Hills, Pacific Palisades & Malibu… and he’s delivered gifts to children in the Housing Projects and elementary schools of East LA, sometimes doing both on the same day.

With the Covid19 pandemic in 2020, Santa Ed went ‘all-in’ on virtual visits. He served as a brand ambassador, Santa recruiter/trainer for the tech virtual visits start-up company JingleRing. Ed also launched santa-claus-virtual-visits.com, built a home studio complete with both a “Santa’s Office” set and a blue screen to use with different virtual backgrounds.

Santa Ed sold out the season… when it was over, he had completed nearly 600 video visits (mostly on Zoom, Teams & JingleRing, now Zuhoo) totaling more than 150 hours of actual visit time.

Of course, Santa Ed’s virtual visits included many visits with children and many virtual family gatherings, perhaps surprisingly there were also many virtual company parties, school & church groups, clients of companies, guests at vacation rentals, employees and families at two US Embassies, a virtual Tree Lighting

ceremony for a university, groups of Special Needs children & adults, television news shows and much, much more… and these virtual visits spanned across the US & Canada, the UK, Australia, Japan, Puerto Rico, Africa, Germany, France, and other far-flung locations.

Santa Ed’s experience in the entertainment business and his training in TV production served him and his customers well in 2020. Many of Santa Ed’s “virtual visitors” said they preferred their virtual Santa experience with Santa Ed to in-person experiences at malls or retail stores, and several of them said video visits with Santa Ed will be their new tradition.

Santa Ed is a real bearded Santa Claus for hire in Los Angeles, Hollywood, Beverly Hills, and the surrounding areas